The Sporadic E season is well and truly "happening" with an opening to Scandinavia on the 25th, when I worked SM5ZCJ, OZ2KEC and 9A2RD all on 6m. The next day it was even better, and I worked SM6CXS, YL2SW, ES5QD, LA5YJ and YL2GP. On this day I heard 2M0UAL working another UK station, this Scot was only 520 miles, much less than the usual 1000 miles. A shortening skip distance often indicates that higher bands are open too and Facebook posts on the 70MHz group confirmed that that band had been busy too.

Last night was fairly quiet, although I did work EA7JUR (and his pet cat).

Well today, it has been Poland coming through loud and clear. I worked Roman SP9RM and Bogdan SP4LVC. While I was waiting for my chance to work Bogdan, I noticed that there was a buzzing sound, which is TV frame buzz. It is quite distinctive because the sound of the buzz changes each time the camera angle changes. So I quickly got out my 5" black and white portable TV set and connected the 6m antenna to it.

I was quickly rewarded with, first synchronisation bars, and then, pictures. Well they are pretty grainy, but at times they were clear and watchable. 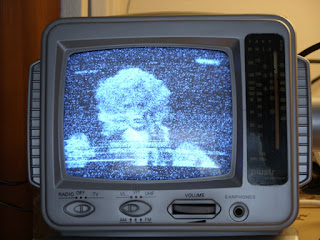 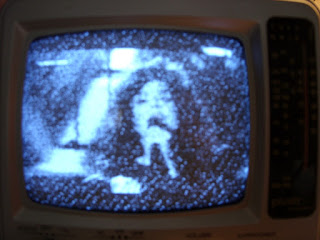 I also tried to make a little video to show how the pictures were constantly fading in and out. I put that up on Youtube, here. https://youtu.be/gL466VSMKaU

Unfortunately, in Europe, the TV frame rate is 25 frames per second, which doesn't work at all well with the 30fps frame rate of the camera. The result is an unstable image with black bars which weren't on the original... but it kind of gives the idea.

For the record, my antenna is very simple, just a 1/4 wave ground plane - that's a 1.5m long whip, poked through a hole in the ridge of the roof. The felt underneath the tiles has an aluminium foil covering, and that is connected to the shield on the coax, so the whole roof becomes a ground plane.