Just over a week ago I bought a new radio, a TYT MD-380 DMR handheld. A new repeater, GB7AS has just opened, about 6 miles from here, and I am keen to access it because it has very good coverage in this area. Indeed, with the links to other repeaters in Kent it should provide opportunities to work many of the amateurs in the the Folkestone area that have been in the shadow of the North Downs for me here.

There is plenty of information about DMR on the Internet already ... although, later, I may blog a bit about using the programming software. I need to get to grips with it myself, first!  One of the things I wanted to do was to make a hands-free set up for the car so that I can take it mobile. However the manual contains no pin-out information for the microphone and speaker, and I couldn't find much about the subject on the web. The situation is complicated by the fact that the same sockets are used for a USB programming cable. So I thought I would write a bit about that here. 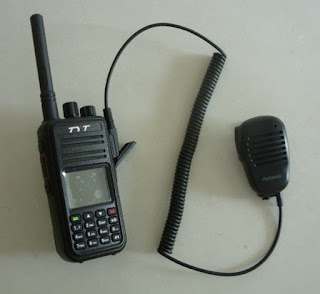 I decided to buy an inexpensive speaker mic for the radio, and use that to find out what the connections are. So I bought one of these: http://www.ebay.co.uk/itm/121920693163
It is a Retevis 2 Pin PTT Speaker Mic for TYT MD380 (and other radios).

Picture of it plugged into the radio at left. 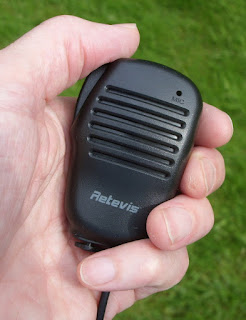 The microphone is surprisingly small, but quite comfortable to use. The sound is even more thin and tinny than that from the radio, which already has a sharp and penetrating quality.

In the photo at left, just where my little finger is and where the cable enters the microphone body, is a socket to plug in an earphone. You can see this more clearly in the photograph of the circuit board below. 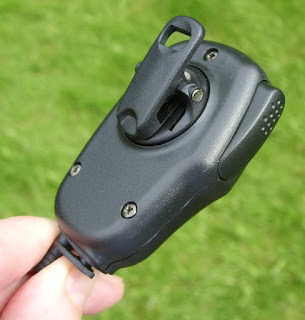 There is a useful clip on the back which partially obstructs the top screw, you need a well-fitting screwdriver to avoid slipping out of this.

The PTT button has a nice feel to it with a tactile click to let you know the contacts have closed.

After plugging in the speaker mic and checking that it basically seemed to work, I set about removing the screws from the back.

There are a further three screws to hold the circuit board to the moulding, and you need to be careful not to loose the little rubber pad which goes between the PTT lever and the button on the board. 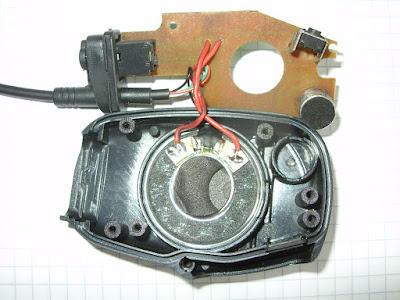 Quite a nice PCB inside, with rather more components than I expected.

Tracing out the circuit, I can see that the surface mount capacitors and inductors are for filtering. Now this is interesting, because I have always taken the approach that you want to prevent RF from entering the microphone socket of the radio, but here the filter seems to be preventing RF from entering the Microphone capsule. Since all electret condesor mic capsules contain a little pre-amplifier (usually just a FET transistor), RF voltages picked up on the microphone cable could potentially demodulate in the microphone. The situation is made worse by the fact that the microphone is likely to be used in very close proximity to the aerial. I have traced out the circuit, but not yet measured all the values. The measurement of the L's and C's requires their removal from the board as the other components affect the reading on the meter. 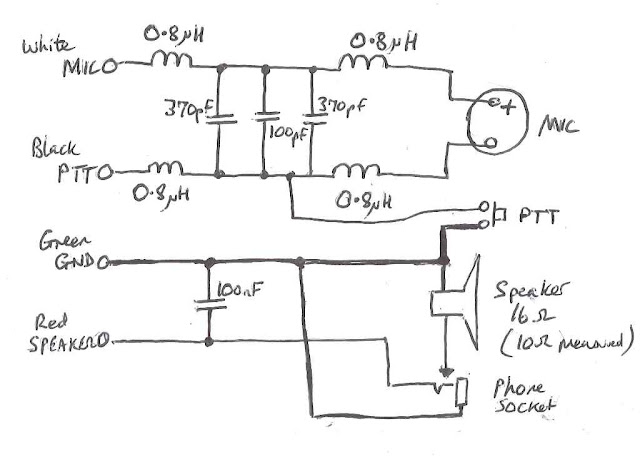 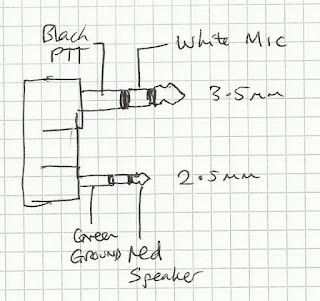 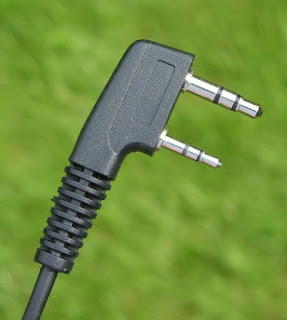 The connections are helpfully marked on the PCB, so all that was required was a continuity test to find which part of the jack plug was connected to which wire in the microphone. The unused (tip of the 3.5mm plug and ring of the 2.5mm plug) are presumably for the USB programming connection.

I note, from the specifications in the radio handbook, that the audio output is 1W into 16 Ohms. I measured the d.c. resistance of the speaker to be 10 Ohms - suggesting probably IS a 16 Ohm part (The d.c. resistance of a speaker usually measures a little lower than the a.c. impedance, as the latter includes the inductive reactance of the voice coil).

At this stage, I am not sure whether to include the filter circuit in my hands-free set-up. In the car, the antenna is further away from the microphone, so the fields should be much less. I may just put some small capacitors across the mic and see how well it works.

The other question I need to mull over is whether to get hold of a 16 ohm loudspeaker, or to try using the 3 ohm speaker that I am currently using in the car. If a 16 ohm speaker is not available, I guess I could build myself a little audio amplifier - but that adds extra complexity and would need a 12V feed from an accessory socket in the car.

So that is the story so far. I hope my look at the audio connections might help you make useful accessories of your own.

Update 13/6/2016: I measured the component values in the filter circuit and added them to the circuit. Also corrected a slight mistake where the PTT button connects to ground.
Posted by Hugh M0WYE at 03:21