Some years ago UK Radio Amateurs were permitted to use the upper part of the 40m band, 7.100 - 7.200MHz. Many older radios, sold in the UK, such as my FT847, restrict the transmit range to what was previously legal, 7.000 - 7.100 MHz. It is rather frustrating when you can hear QSOs or CQ calls, but when you press the transmit switch you get a "beep" and an error message. Doubly frustrating when you know the circuitry is quite capable to transmitting and radios sold in some territories, such as the USA, do cover that part of the band.

I wanted to use the radio during the forthcoming "Mills on the Air" special event station, GB8WW, and it seems that the 40m band is used a lot for Special Events, so full coverage would be essential.

"Widebanding" radios, modifying them to transmit at any frequency, is quite commonplace, but requires the operator to take great care not to transmit outside of the band where they are legally allowed to. With the FT847 there is a further complication. The radio covers VHF and UHF as well, and the programming links which set the TX limits also affect the repeater shifts and the radio's ability to transmit on the 70MHz VHF band.

Fortunately G1IVG has put a useful table on his website, here, which shows the different ranges available. The programming links are on the PCB next to the memory backup cell. You can see them, numbered from 1 to 6 in this picture. 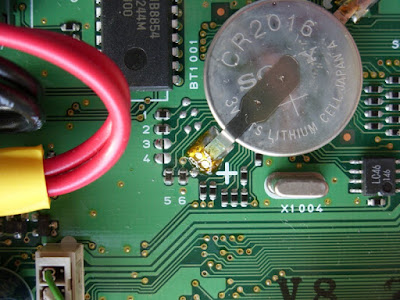 The links look like surface-mount resistors, but are actually "zero-ohm links", and can be replaced by blobs of solder or very short pieces of wire. You can see that links 1, 2, 5 and 6 are shorted and links 3 and 4 are open. (Always useful to take a photo before you make a modification so you have half a chance of putting it right if it doesn't work!).

Looking at G1IVG's table you can see that there are only two link settings where the radio has the 70MHz band, the first is the standard UK configuation that I have, and the second one has links 1,2 and 6 shorted and the others open.  The HF options are in the table below, and this link combination gives the HF bands in row 5.
All the HF bands, except topband and 10m, are made 500kHz wide - so one still has to be careful not to transmit out of band, but, the problem of the 40m band is certainly solved by this. It doesn't allow the radio to operate on the 60m band, but (at the moment) this doesn't interest me much.

Performing this mod wipes all the channel memories and any changes you may have made in the menu system (display brightness, channel steps etc.), I already had a list of all my channels, with the CTCSS frequencies, repeater offsets etc, but I went through the menu system and carefully recorded all the settings there too.

So... I chose the finest soldering iron bit, found my tweezers and strongest reading-glasses, and set to work. Instead of removing the link 5 completely, I turned it round, so that it is still attached to the ground pad. That makes it easier to undo the mod, or reuse the link on a different pad if I need to. The photo at left shows link 5 under a magnifier.

The links are only read by the microprocessor at factory reset, so it is necessary to hold down the "lock" and "fast" keys when you power up the radio for the mod to take effect. This is why all the all the channel memories are erased.

I turned the power control down to minimum, attached dummy loads to all four antenna sockets and carefully explored the frequency ranges. I am pleased to report that the new transmit ranges seem to match up with those in the table.

The repeater offsets basically match up with the UK standard settings, except for 50MHz where the offset is 1MHz instead of 500kHz. This is configurable in the menu system. So it all seems quite promising, and the radio is "good to go" for Mills on the Air 2016.