When operating a special event station it is useful if the visitors can hear the audio output of the radio, and it is also useful if the operator can wear headphones - because there is always chatter and other noise going on in these places. But, when you plug headphones into the Yeasu FT847 the loudspeaker is switched off, so no one else can hear.

I found a fairly easy way round this. There is a second audio output available on the rear of the radio which has a 200mV output level, that is independent of the Volume control on the front panel. This is on a stereo 3.5mm jack socket marked Data In/Out. It is intended for connecting a packet TNC, or other data-mode device to the radio, but the audio quality from this socket is good. 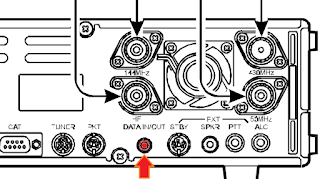 Red arrow shows the Data In/Out connector on the back of the radio.

The output is about the right level to drive a pair of PC speakers, but there is a snag ... The audio out is on the ring of the jack and the tip is used for PTT and for audio in, so if you plug the stereo plug from the speakers into this socket the radio goes straight into TRANSMIT! This is because the input impedance of the speakers is sufficiently low to make the radio think that the "TNC" has selected transmit. So I made up a simple adaptor out of a plug and socket, wired as shown below ... 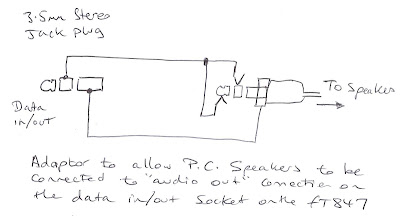 Do test the speakers with the radio on transmit before using them at the event, because PC speakers are notorious for being sensitive to RF fields and may demodulate your SSB transmissions in an unpleasant way! Fortunately the speakers lent to us by Chris, G6AFY, were of high quality and behaved very well. 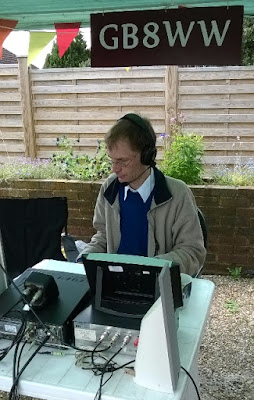 So here is a picture of me operating GB8WW with my FT847 and the PC speakers plugged in the back, the stylish, wedge-shaped thing in the foreground. If you look carefully you can see the adaptor-lead plugged into the back of the radio.

The headphone volume is controlled by the AF gain control on the front of the rig and the PC speakers are controlled with their own volume control.

One of the criticisms of the FT847 is the "steppy" digital AF gain control on the rig, making it hard to get the right listening level - so using an external speaker on this audio output might be a way round this in the shack - so this adaptor might be useful for more than the occasional special event station.