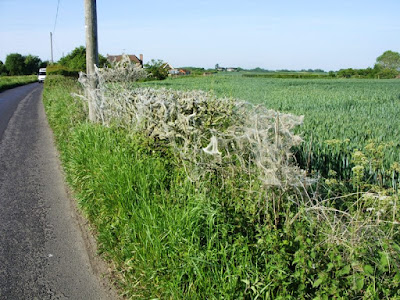 I notice that there are a few places along my route to work where the hedge is festooned with what looks like spiders web. 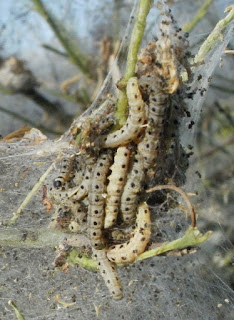 A closer look reveals that the culprit is not a spider, but lots of caterpillars.
This last happened in May 2011 (I still have the photos I took then!), and a bit of research then revealed that these are ermine moth caterpillars, and their host plant, is the spindle tree.
On the Wikipedia page there is a picture of the moth, but I have never knowingly seen one of the adults.  https://en.wikipedia.org/wiki/Yponomeuta_cagnagella 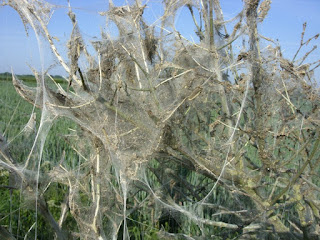 The plant has been completely stripped of leaves, but in 2011 the bare twigs sprouted new leaves after the caterpillars had gone. It can't do the spindle tree much good, but it does seem to recover. So I hope it will do so again this year. I notice that the parts of the hedge which are affected are all close to telegraph poles - not sure if that is coincidence.

Since I travel this route almost every day, I think I would have noticed if there had been similar tents in the hedge between 2011 and 2017, but I don't recall seeing any. So that raises the question is this a regular event occurring every six years? or is it just the climatic conditions have been ideal for the caterpillars? At the moment ... we just don't know ...
73
Hugh M0WYE