Simulating the FIlter in the Microphone

Having measured the values of the filter components in the Retevis Speaker-Mic, I thought it would be interesting to simulate the circuit and find out roughly what the cut-off frequency was.
I use the free simulation software from Linear Technology, called LTSpice. http://www.linear.com/solutions/ltspice
Here is the circuit ...

At this stage I used 50 Ohms for the input and output impedances, and got this nice curve: 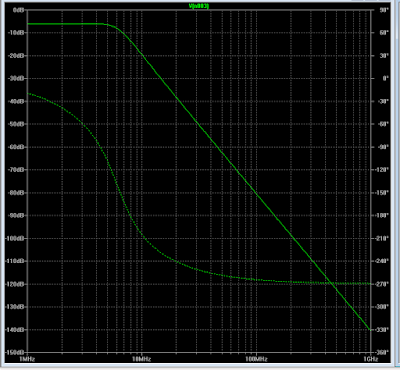 The cut-off is surprisingly low at around 5Mhz but the attenuation at 433MHz is (in theory) 120dB. 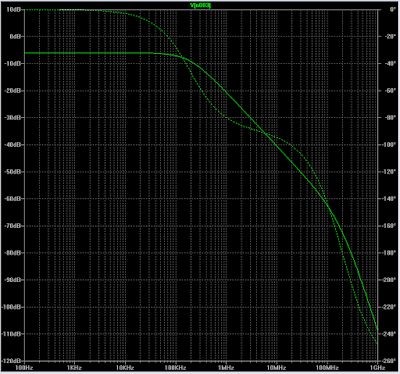 I also extended the lowest frequency down to 100 Hz to see what was happening in the audio range. It is very different. However the flat response up to 100kHz will still pass all the audio frequencies ok, and the filter still appears to offer significant attenuation in the UHF region.

The dashed line, by the way, is the phase response, using the scale on the right hand side. The solid line is the amplitude response using the decibel scale at left.

It would appear that the designers of the filter may have simply designed a 50 ohm impedance filter and hoped it would do the job.

Another thing I noticed when measuring the inductors on the board was how low the Q factor was. The meter said 0.031, with a series resistance of 0.186 ohms. It made me wonder whether the inductors were of the conventional kind, or whether they were the special EMI absorbing sort, like these from Wurth Electronics WE-CBF SMD EMI Suppression Ferrite Bead
I think these tend to be deliberately lossy to absorb the RF energy, while at the same time having a low d.c. resistance. There are no markings on the parts fitted on the board, so it is difficult to tell what they are. One would normally expect the Q factor of a surface mount inductor to be, say 30 - 40.

Still not sure what to put in my hands-free set-up!
73
Hugh