Permanent magnets vary a lot in strength. The position of the North and South poles can be in unexpected places too. At school we compared magnets by how many paperclips they could lift, and it is possible to plot the field lines using iron filings and a compass needle. But these are rather inexact methods.   It would be nice if there was a digital magnet-meter.
It turns out that such a thing is quite easy to make. I have found one very useful for investigating the magnets in guitar pickups. 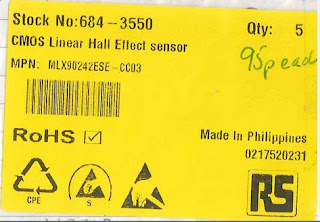 I used a hall-effect device from a company called Melexis. I bought it from RS components, in a pack of five, and they worked out at just under a pound each. The particular component I used seems to be obsolete, but hall effect devices are still being used, so I'm sure it would be possible to find something
suitable. I plug the probe into a digital voltmeter to get a reading.


The data sheet is here: https://www.melexis.com/-/media/files/documents/datasheets/mlx90242-datasheet-melexis.pdf

The device runs off a 5V supply, so I used a 78L05 regulator. It might have been better to have used something a little more accurate, because the output voltage swings from just above 0 Volts, maximum north-south, through 2.5V with no field to 5V maximum south-north, and that mid-point of 2.5V end up being a few mV offset if the supply isn't accurate. Anyway, the circuit is given in the datasheet. I used this: 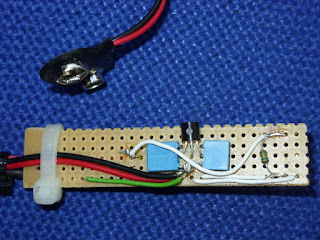 The circuit runs off a 9 Volt PP3 type battery and connects to a Digital Voltmeter. I built it on a small piece of veroboard. The veroboard is actually covered with thin transparent tape. You need to be able to see where the sensor is and you need to be able to get it very close to the surface of the magnet you are measuring. So avoid having components that are taller than the device close to it, or they will get in the way. But the tape is needed because some magnets are conductive and cause short-circuits. The photos show it with the tape removed.

The diagram at left shows how it is laid out, using chip capacitors, and breaking the veroboard track between pins 1 and 2.

You need some fairly fine soldering. It helps to make sure the copper strips are really clean and shiny, use a very fine tipped soldering iron and some thin solder.

Calibration is quite straightforward, because the sensitivity is given in the data sheet, you can work out how many volts you get for a given value of milliTesla. If you wanted to calibrate "properly" you will need to put the device in a known magnetic field, perhaps generated in the Helmholtz coil that I describe elsewhere. http://m0wye.blogspot.co.uk/2018/05/building-helmholtz-coil.html

I drew a graph in Excel based on the figures in the table above. 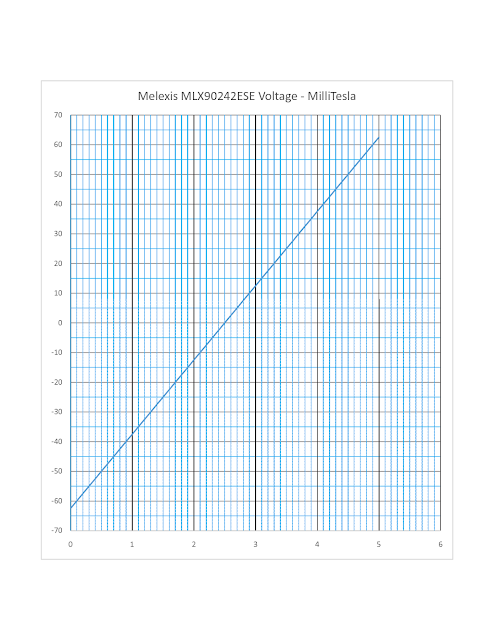 Now some magnets are too strong to measure - they read either 0 or 5V depending on which pole, but you can always space the sensor away from the magnet to be able to compare the strength to a different one.
It is worth noting that the device is not sensitive enough to use as an electronic compass. If you amplify the output you will soon find that the limiting factor is noise. The Hall effect device is quite noisy, so magnets like the Earth's magnetic field, which is of the order of 50 micro Tesla, are lost in the noise from the device. 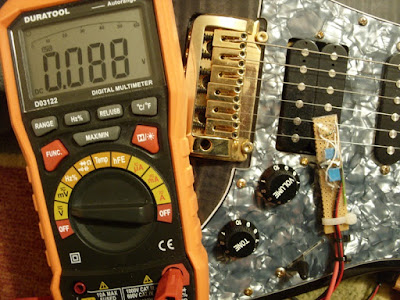 But for comparing the strength of the magnet in one guitar pickup with another, it is ideal.

And here's a picture of my hall effect probe being used in this way.