The controls on my bass guitar make horrid scratchy noises when you adjust them. I have sprayed them with switch-cleaner, and they go quiet for a few months, but gradually the 'orible noise comes back. So, I think it is time to change them. But what type are they? 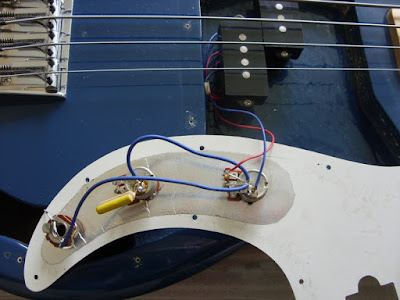 Carefully removing the scratch-plate screws and looking at the writing on them gives the value, but not the "law" of the track of the potentiometer. The tone control says A500k, but does "A" mean linear or logarithmic? It is quite easy to measure without desoldering anything because the capacitor is open-circuit at d.c, so it won't affect the resistance-meter reading. I set the pot half way and it measures about 27k between the end of the track and the wiper. Measuring between the ends of the track 470k. So this is clearly a logarithmic part - if it was linear it would measure half the value in the middle of its range. The diameter of the body of the pot is 16mm and it has a splined shaft. 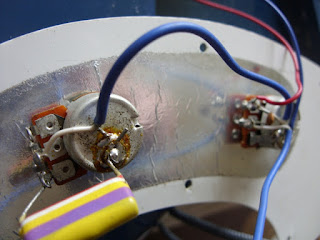 The Volume control has the pickup connected across it, which would affect the resistance reading. This meant desoldering wires from the pot. This one measures about 250k in the middle and 500k from end to end, making it a linear law.

While everything was disconnected, it gave me a chance to measure the d.c. resistance of the pickups - 12 kilo-ohms.

It seems a bit strange to have a linear pot for volume, but the adjustment seems smooth and progressive, so no reason to change it. 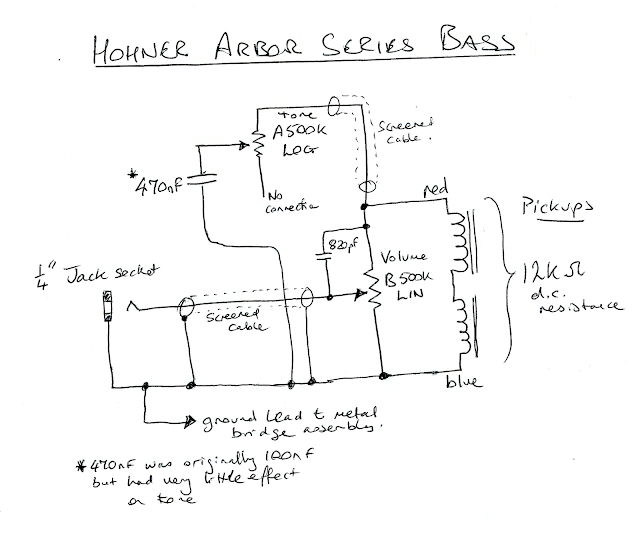 The 470nF capacitor is not the original component. Soon after I got the bass I was disappointed by how little effect the tone control had on the sound. From memory, there was a 100nF cap in there - (probably what was fitted to Hohner's "normal" electric guitars). Bass guitars need something bigger. I tried a few different values and settled on this one which goes from very soft and muffled to bright and zingy.

I should have enough info to get some replacement controls now. I see CPC sell some with conductive plastic tracks - they might be a quieter alternative to the old-fashioned carbon track.
Order codes RE06797 and RE06795, and quite cheap too.