I've got a variety of bull-dog clips, clothes pegs and "extra hands" to hold small items when soldering. I did have a small table-top vice, but my son "borrowed it" and it has obviously proved very useful to him ... haven't seen it since :-)

When I saw that Lidl's were offering a table-top vice for eight quid, I thought I would give it a try.
Lidl's Table Top Vice Offer. 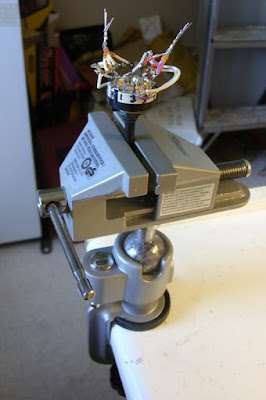 Some of their tools are very good value for money, occasionally I have wished that they were better quality!
This product seems ok ... but there are some important things to be aware of. One is quite obvious when you pick up the box in store - it isn't very heavy! It is not made of steel, it is made of an aluminium alloy (clearly stated in the instructions) and this means the casting is not going to be very strong. Don't expect to use it like an expensive Record vice for hammering and bending thick metal, it will break.

The aluminium will likely not be as hard-wearing as steel would be.

The main tommy-bar, used for tightening the jaws of the vice is quite nice, with a detent at each end, so that the bar clicks into place at each end of its travel. However I found that all the screw threads felt rough and "graunchy" - not smooth at all. Although the instructions make no mention of lubrication, the first thing I did was to apply grease to all the threads and the grooves where the moving jaw of the vice slides. I also greased the ball and socket and now it feels much nicer to use.
hopefully that will extent the life of the threads a bit too. Time will tell.

The vice is supplied with soft, plastic covers for the jaws, which could be useful for holding some items, but will obviously be useless for soldering, because they will melt! Underneath the plastic covers are smooth metal jaws, one of which has two grooves at right-angles. The grooves are for holding round objects.

Supplied with the vice is a clamp for holding tubes of between 38 and 43mm diameter. This seems rather a limited range to me, and it is complicated to fit the tube attachment. To do this you have to remove a the jaws, which requires the use of the supplied hexagon wrench. However, the fact that the jaws can be removed does allow for the user to create their own attachments. 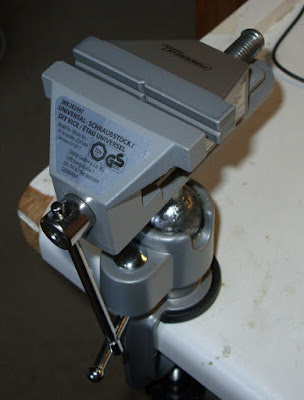 I'm thinking that this will be very useful for holding plugs, sockets and circuit broards instead of chasing them round the bench with the soldering iron.