Playing the guitar a little bit, I have often looked enviously at the pedal-boards fitted to pipe and electric organs which allow the musician to add bass notes to the music, while keeping the hands free for twiddly bits. Why not do the same for guitar?

Years ago Maplin used to sell electric organ parts, including a pedal-board, which is sadly no longer available. I suppose one could buy a junk instrument and repurpose the pedals, but rather than base the design on 13 note octave, it might be best to work around the musical intervals. A simple three-chord song would use chords rising from the tonic, the fourth and the fifth. Add the relative minor on the 6th, a minor third and so on, and you could play the root notes of all the common chords with about eight pedals.

A simple mechanical arrangement is what is needed for home construction, I’m using the springiness of the plywood pedal as a natural spring, which makes the mechanics much simpler. The switches are released when the pedal is pressed down which makes it more robust, because the pressure of the foot doesn’t bear on the switch mechanism.

The electronics is really simple. A PIC microcontroller looks at the pedal switches and sends appropriate MIDI signals out on the serial port to play a synth, or digital piano. There are a pair of switches on each pedal so that I can make it velocity sensitive – that way I can play louder notes if I stamp harder. 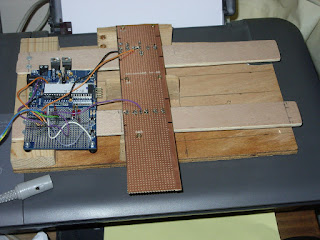 So here is a picture of the two pedal "prototype" I constructed to try out the mechanics of the switch. The circuit board is a prototyping board I bought from CPC, but more of that in a later post. 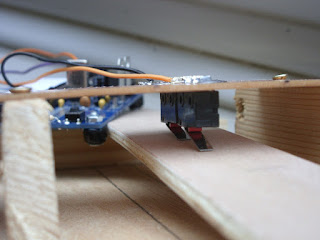 I have tried three types of switches. The ones shown are too “clicky” and make a lot of mechanical noise when attached to a wooden board. I have settled on some sub-miniature ones which are much smaller, and more demanding in terms of mounting, but are much quieter.